You are in for a treat today as I am posting two reviews today.  I actually had time to catch up on a few films/series that have been on my list to watch. Also, leave me your thoughts on the new theme! 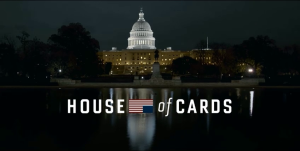 House of Cards, directed by James Foley and David Fincher (among others), is a political drama involving the most recent United States election.  House of Cards stars many famous names, most notably Kevin Spacey, Robin Wright, Kate Mara, and Corey Stoll. Okay so you probably don’t know at least half of those (except for Kevin Spacey, everyone knows Kevin Spacey), but they are definitely big names after this show.  While only having completed the show’s first season, House of Cards is considered one of the best shows to watch on Netflix.  Not bad Netflix for your second try at an original series.

House of Cards is absolutely Kevin Spacey at his finest.  While he plays within his element, his portrayal of Francis Underwood is absolutely perfect.  Francis Underwood is the main character of the series and we follow his lengthy, but well thought out, plan to take back a higher position of power within the government after being declined for the Secretary of State position after a promise from the President-elect.  There is corruption and back stabbing everywhere.  Francis Underwood is not afraid to use or eliminate anyone who can possibly help his chances, not even stopping at his wife.

The best aspect about House of Cards is that it almost feels like a Shakespearean play.  Francis Underwood (Spacey) steps outside of the conversation on screen, and breaks the fourth wall.  He directly addresses the audience through what is called an aside, telling us exactly what he is planning and thinking.  It is the stylistic choice of the creator of the show as a different form of a voice-over and I think it works. It helps Spacey feel more formidable.  Here is an example of the aside: 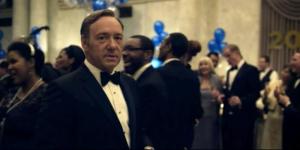 Cracked.com also does a hilarious sketch that accurately displays this aside.

Now on to the fun part of the review. Luckily it is going to be short this time.  My main issue with House of Cards is the relationship between Francis (Spacey) and the two main women of the show: his wife Claire Underwood (Wright) and young ace reporter Zoe Barnes (Mara).  My issue is that everybody cheats on each other with someone else, yet nobody really does anything about it.  Later on in the series Claire leaves Spacey after he cheats on her with Zoe, yet to only go cheat on him.  There is a really “different” scene in which Francis is performing oral sex on Zoe while Zoe is on the phone with her father.  In that scene Francis acts as a sexual partner, a source, and a father figure at the same time. Now that is some fine damn acting. 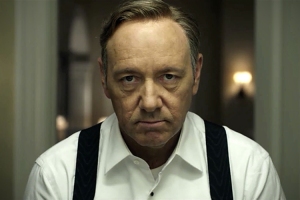 He could be your daddy.

Overall the show is absolutely amazing, and I am excited to see where it will take us in Season 2 in 2014!

One thought on “House of Cards: Kevin Spacey and Corruption”