Hello everybody! I hope everybody is enjoying all of the reviews. Thank you for the suggestions and I hope to receive some more! 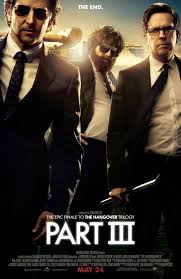 The Hangover Part III lets audiences rejoin the Wolfpack in an entirely different way then the last two films. Todd Phillips finally realized that what people want from The Hangover is more Alan and Chow. That is what exactly this version of The Hangover gives audiences, but it disappoints because Ed Helms and Bradley Cooper have fallen into the background completely. This is definitely an Alan and Chow show. 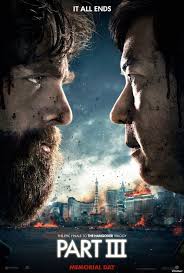 Granted I’m definitely not saying that it is a bad thing. We get to see a very dark and twisted side of Alan (yes even more than the last two films). Oh and Chow? He is definitely even more insane than the last two films, except now he is stealing gold from John Goodman. You don’t steal John Goodman’s gold. One of my favorite scenes is early in the film where Alan causes a 20 car pileup and accidentally kills his pet giraffe.

. While I really didn’t want to see this one, as I did not have very high expectations for it at all. Although, I have to said that it did pass what little expectations that existed. They finally got rid of their “tried and true” formula, but still pay homage to it with a post credits scene.

Overall, it wasn’t half bad to change up the formula, but it was nice to homage to that one wild night that captivated us oh so many years ago.

One thought on “The Hangover Part III: Finally Rid of that Wild One Night”