Before I get to the review, please take the time to check out my other site The Electron Pub @ theelectronpub.wordpress.com. I’m working towards my bar tending license, so here is where I post reviews of drinks, recipes, and eventually some instructional videos.

NUMBER OF EPISODES: Twenty Six and one live-action film

Alright, so I have looked past Mushi-Shi in my Netflix queue many times while I was looking for a new anime/show to watch. After I finished D. Gray Man, I talked with one of the other writers for the site (he hasn’t published anything recently, he is working on a video game project) and he gave me a few suggestions on a few different anime to watch. When I mentioned Mushi-Shi, he said it was very artsy and unique. It apparently as won many awards. Great, my first artsy anime, let’s do this!

Mushi-Shi is an episodic anime following the travels of Mushi master Ginko and his encounters with many different kinds of Mushi.  A Mushi is a spirit entity that exists on a separate plane as normal humans but exists in the same world as ours.  Every episode Ginko (except for two, where he is not in the episode entirely) solves a problem for some villager in some village over the mountains. It gets kind of old after a while. 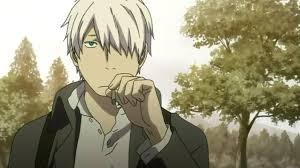 There are a few features that make Mushi-Shi very unique. First off the episodic structure is pretty awesome/annoying. The reason it is awesome is that instead of just a few different story arcs throughout the series there is a different one every episode.  Why it is annoying I will get to later.  The animation is absolutely flawless and beautiful, it feels serene.

Alright, so the reason why I find the episodic structure annoying is that in ever episode Ginko has to explain what Mushi are and why they exist to every villager that he comes across. It gets irritating after you have watched the majority of the show.  The other part that was disappointing is there is only one recurring character in the show. I know it is episodic and all, but I wish we had some more characters besides Ginko.