Hello everybody! This week on Anime Madness I reviewed a 1988 classic, My Neighbor Totoro.

My Neighbor Totoro is a 1988 fantasy film that follows a university professor Tatsuo Kusakabe and his two daughters Satsuki and Mei. The family moves closer to live near their mother, Yasuko, who is suffering from a long term sickness. Their new house is inhabited by tiny animal creatures called “susuwatari” who are little spirits that infest the darkness. Over the course of the film, Mei and Satsuki discover all of these other creatures that give them escape from reality.

While I don’t want to tear apart My Neighbor Totoro, but I will for you readers. My main issue with the film is that the film is very slow moving. In all consideration, not much actually occurs throughout the film. My Neighbor Totoro is just about two girls trying to deal with a bad situation. Also, I wish there was more variation in the “susuwatari”. I mean we have the shadow susuwatari, three Totoros, and the cat-bus. It would be so much cooler if there were at least a few more. 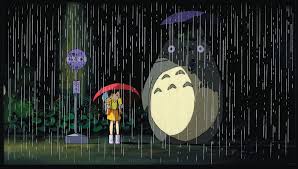 My Neighbor Totoro is one of Miyazaki’s finest films. The film allows the children to escape into a world of fairy tales and magical creatures so they can get away from the troubles of real life. The catbus is simply amazing, how it overpowers the landscape just defies reason. But hey, its a magical wonderful world. Totoro serves as an inspiration to many children that were growing up in the late 80s and early 90s. my Neighbor Totoro will remain one of my favorite anime films to date.

Check out this fan made trailer below: