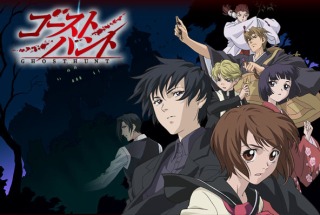 Alright, so Ghost Hunt was viewed on a complete whim. I just finished watching what Netflix offers of Fairy Tail. I just finished what is left of the Funimation dub, which I believe goes up to episode 72. I’ll have a review for that once I finish the next 100 episodes for that show. Anyway, here is my review of Ghost Hunt.

Ghost Hunt is a occult detective anime created in 2006. The main story arcs of Ghost Hunt mainly involve the main employees of the Shibuya Psychic Research Center and their various cases. Throughout the 26 episode anime, there are 8 different cases. The majority of these cases last at least three episodes, while one or two span one episode and two episodes respectively. The main employees of the SPRC (Shibuya Psychic Research Center for short) consist of Kazuya “Naru” Shibuya, Mai Taniyama, and Lin Kuojo. They are normally assisted by their friends/contractors: 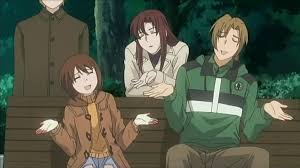 ” The Winchester Mystery House is a mansion in Northern California, once the personal residence of Sarah Winchester, the widow of gun magnate William Wirt Winchester. The property and mansion have been claimed to be haunted—including by Winchester herself—since construction commenced in 1884. Under Winchester’s day-to-day guidance, its “from-the-ground-up” construction proceeded around the clock, without interruption, until her death on September 5, 1922, at which time work immediately ceased. The cost for such constant building has been estimated at about US $5.5 million (equivalent to over $75 million in 2012). It now serves as a tourist attraction.  Though it’s possible she was simply seeking a change of location and a hobby during her lengthy depression, other sources claim that while consulting The Boston Medium, Winchester came to believe her family and fortune were haunted by the ghosts of people who had fallen victim to Winchester rifles, and that only by moving West and continuously building them a house could she appease these spirits.[Located at 525 South Winchester Blvd. in San Jose, California, the Queen Anne Style Victorian mansion is renowned for its size and utter lack of any master building plan.”

Unfortunately, despite Ghost Hunt’s interesting cases and characters, there is not really anything scary about the show. While there are some moments that are very creepy, I think Ghost Hunt tries to hard to scare their audiences/viewers. I would say the only scenes that even remotely creeped me out was some of Mai’s visions of torture and murder, but they only affected me in the slightest way possible. I have seen/read way too much on the Internet for this to affect me, damn I am jaded. I warn you still, if you are easily scared then take head in watching Ghost Hunt.