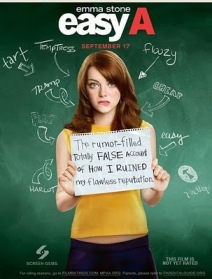 Alright, this is another one of those films that I was tricked into watching, just like White Chicks. At least this one was somewhat decent and actually had me laughing at some scenes.

Easy A follows Olive Penderghast, a straight A/model student, turn into the school whore. Easy A shows exactly how fast rumors spread and when someone tells only one little white lie it can expand into a whole web of lies. In this case though, it wasn’t exactly the smallest of lies. Olive lies to her best friend, stating that she slept with a college freshman named George. After that, Olive’s whole high school experience changes. Guys start to take notice of her, the popular girls get jealous of her, and she starts becoming more of “that girl” instead of the quiet and meek girl that nobody pays attention to. This whole thing came about as an excuse to not hang out with her best friend and nudist parents, but she then decided to adapt it while she reads The Scarlet Letter.

Easy A was actually quite a funny teen comedy (I’d never thought I would say that about a teen comedy). I would have to attribute most of the humor Emma Stone. She is one of the funniest actresses I have watched on screen in a while. I absolutely loved her in Zombieland. She has that certain skill to bring comedy to any situation. Easy A, the film as a whole, actually does quite a great job at displaying the transition of a shy girl to becoming a popular one.  It also shows how bad social groups and cliques are when it comes to the spread of information.

Despite Emma Stone’s performance, Easy A does have plenty of faults. First off, it is a teen comedy. There are very few teen comedy films that I think deserve any recognition, and the only one that comes to mind as I write this is Not Another Teen Movie. That film isn’t very good but I still like it.  My main issue with Easy A is the generic character casting. I know that it is supposed to be as close to a typical high school as possible, but it is just too typecast. All of the characters seem perfect for their roles, but none of the characters seem anything close to unique except Lisa Kudrow. Damn I love her.