TITLE: Dr. Strangelove: How I Learned to Stop Worrying and Love the Bomb

Dr. Strangelove is one of Kubrick’s most famous films. It’s success could be attributed to Kubrick. He turned feelings of fear against Russia and apprehension of the Cold War into comedic gold. Also Peter Sellers kicked ass in three different roles! I don’t think many people could pull that off anymore. 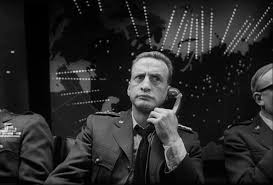 Dr. Strangelove or How I Learned to Stop Worrying and Love the Bomb, is one of my favorite black and white comedies. While I enjoy all of Stanley Kubrick’s films, this is by far one of my favorites overall. Peter Sellers is awesome as Mandrake, the United States President, and former Nazi Dr. Strangelove. All of the characters are hilarious to watch and very quotable. The writing is awesome and as a writer myself this is one of the films that influence me. 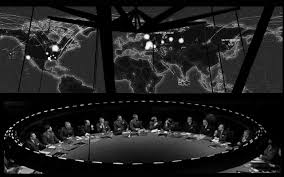 While I absolutely love this film, I still have some issues with it.  The film is very slow to get rolling, but once it does it is a hoot and a half. Sorry for that, too much Big Bang Theory. Some of the secondary characters are very droll and hard to watch, but they serve their purpose. They show how boring and idiotic politicians are, especially in a position of power.