In today’s world, much is accomplished through the use of computer systems which use voice recognition, those computer systems which in turn communicate to their user often through a generated voice. Theodore Twombly, who works as a writer of computer generated handwritten letters for clients, is an introverted man who is on the verge of divorce from his long time love, Catherine, a marriage with who he is hanging on for dear life. Beyond his purely platonic relationship with longtime friend, the married Amy, Theodore is having problems moving onto other satisfying female relationships, either romantically or even sexually, until he realizes that he is falling for his confidante who has become possibly his best friend, Samantha, the name that he has given to the artificial intelligent operating system that powers all his personal technological devices. As Samantha is designed to cater to Theodore’s needs, she evolves to a point of falling for him as well. Beyond the fact that Samantha does not have a body, they have to come up with ways of evolving the relationship into one that is truly fulfilling in every component. Three of the many questions that may arise are if Theodore’s relationship with Samantha is preventing him from having a more satisfying relationship with a female human, if they truly can be bonded in all aspects being two different beings, and if Samantha’s quick evolution means that she will evolve even further to her own form of self-fulfillment.

I just have to say this, I love Her. Her has to be my favorite film of 2013, I actually found out about Her after a conversation with one of my colleagues about the taboos of today’s society. Specifically we spoke about Siri and how lively many of the AIs are in today’s market. I have to point out that Joaquin Phoenix and Scarlett Johansson’s voice performed perfectly. I actually started to fall in love with these characters, I loved this film that damn much. Hit pretty close to home in my earlier years. 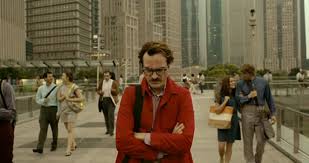 I loved Her so much that I really don’t want to write this paragraph. So guess what, I won’t. Nah I’m just kidding. I have to say, while I loved Joaquin Phoenix’s and Scarlett Johansson’s performances, I felt that Olivia Wilde and Amy Adams were almost turned into side characters! What the fuck?!? They are amazing actresses and deserve to be acknowledged for their work. Also, without spoiling too much for you, there is a twist in the third act to pissed me off. I get why it was necessary just didn’t like it one bit.