Hello everybody! Today we have the much awaited sequel to Will Ferrell’s comedic cult classic Anchorman: Legend of Ron Burgundy. Having left San Diego for New York City, Ron Burgundy is living the high life with his wife Veronica Corningstone and son Walter Burgundy. However, when the boss decides to promote Veronica to full time lead anchor and fire Ron, everything changes. Now heading back to San Diego, Ron is washed up and working part time at Sea World. His shot at redemption though comes in the form of a man named Freddie Schapp, who’s an executive producer at the Global News Network, the world’s first 24 hour round the clock news channel. He hires Ron, who proceeds to reunite the news team of Champ, Brick, and Brian, and head back to New York City. While there Ron and his news team are given the graveyard shift and a challenge. Ron comes up with a radical new idea to transform the news and that puts him at the top of the game once again. But how long will Ron’s newfound fame last? And will Brick finally find true love?

I have to put this out there, I wasn’t a fan of the Anchorman series after my first viewing. It took me a second viewing to be able to actually find the first film funny. I am not a Will Ferrell fan at all, but I couldn’t see anyone else as Ron Burgundy. Will Ferrell is that special kind of stupid actor that is perfect for a stupid role. I want to point out that the best parts of Anchorman 2 are the cameos.  There are sooooo many cameos that it is almost too much. It is just enough. 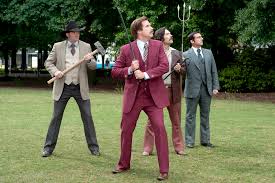 Like I stated above, I wasn’t a fan of the Anchorman series after my first viewing. This is the same exact feeling I got when watching Anchorman 2: Legend Continues. I was completely annoyed watching this film, since I went into the film expecting high praise.  This definitely was not what happened. First off, Steve Carrell is not funny as Brick. He was annoying and irritating in Anchorman and it wasn’t any better here. Why give him a bigger role? Couldn’t figure out what to do with Ron? Will Ferrell as Ron Burgundy is the face of Anchorman and I felt that he faded into the background in this disappointing sequel.