Hello everybody! Today we have another installment in the Hetalia series, Hetalia: The World Series.

You can check out my review of another installment here Hetalia: The Axis Powers.

NUMBER OF EPISODES: 48 episodes (Plus 4 OVA)

Italy, once home of the strongest empire in the world, has changed. This is the story of Italy, now a cowardly pasta-loving fool, and his friends (other personified countries of the world) as they live through strange moments in world history. (This is a continuation of the first series.) Hetalia: The World Series focuses on other countries other than the Axis Powers, even though they are still present. They offer some of the funnier scenes throughout the entire series.

Hetalia: The World Series is the continuation of the Axis Powers series, since the introduce and focus on many different characters that are not Italy, Japan, and Germany. Don’t get me wrong though, they still appear quite often. The World Series follows the same episodic length and format as the Axis Powers, which definitely works to the shows advantage.The World Series mainly focuses on the Allied forces: America, Britain, France, China, Canada, and Russia. There are definitely plenty of great stories to tell with these characters. 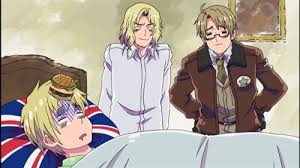 Hetalia: The World Series suffers from a major drawback. The Allied forces just aren’t as funny as Germany x Japan x Italy. While there are some hilarious stories, it won’t beat Germany’s aggressiveness, Italy’s cowardness, and Japan’s passiveness in sure hilarity. I also feel that throughout the World Series the historical factor seems to be more and more lacking. Sorry Allied forces, the Axis Powers win this round.