Hello everybody! Today we have an interesting film, Rio 2. 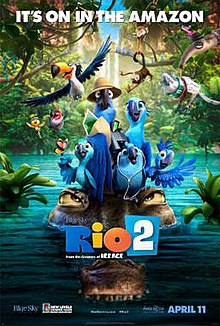 Blu and Jewel have three kids and while Jewel tries to teach the children to live off the land, Blu lives like he did in America. Linda and Tulio who are now married go to the Amazon to bring a bird they nursed back to health to its natural habitat. While there, they think other birds like Jewel and Blu live there. So they go on TV and say they will find them and when they do, it will help get the area declared a preserve. But a logger not wanting that to happen tries to stop them. When Jewel learns of this she wants to go there and see if there are any other birds like them. But Blu who is a city bird doesn’t want to but he decides to go to make Jewel happy.

I went into Rio 2 really wanting to have watched the first Rio. I didn’t know any of the characters or their back stories but I am kind of glad that I didn’t. They covered it just enough so that you didn’t have to actually have seen the first film. They also expanded on the wife’s back story as we meet what’s left of her family in the wild. The voice acting is spectacular, even with the majority of the voice cast consists of music artists. The film is also animated beautifully. All of the colors of Rio de Janeiro and the Amazon really come alive. Way to go Blue Sky Studios, you win again. 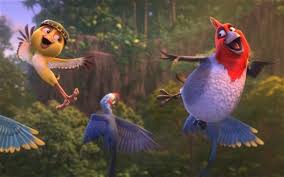 Rio 2 was definitely not what I thought it would be. Firstly, Rio 2 is incredibly short with a 101 minute run time. I felt that I wasn’t even in the theatre for more than two hours. Secondly, there was way too much singing for me to handle. I can barely handle a song here or there (I really don’t like musicals) but there was an overabundance. Some of the songs weren’t half bad, since there was quite a bit if Spanish influence (since they are in Rio de Janeiro after all). Lastly, I felt Jesse Eisenberg was poorly cast. He did a decent job overall, but I was surprised he was cast at all.