Hello everybody! Today we have a quickie review of the 2011 reboot of Hunter x Hunter. Gon Freecss is a young boy living on Whale Island. He learns from “Hunter” Kite, that his father, whom he was told was dead, is still alive somewhere as a top “Hunter,” risking his life to seek unknown items, such as hidden treasures, curiosa, exotic living creatures, etc. Gon decides to become a professional Hunter and leaves the island. To become a Hunter, he must pass the Hunter Examination, where he meets and befriends three other applicants: Kurapika, Leorio and Killua. Can Gon pass this formidable hurdle, the Hunter Examination, to become “the Best Hunter in the World” and eventually meet his father? 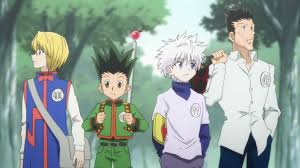 The series features 5 main story arcs that vary in nature and tone. Hunter x Hunter’s arcs are also connected with one another, with each arc naturally following the one before it. This creates a realistic transition that is uncommon to the genre and highlights what the series really is, a journey. Pacing and development are also excellent. Although Hunter x Hunter’s primary strength lies in its writing, its characters come pretty damn close. HxH has a huge cast of characters. They have quirks, dreams, inner demons, worldviews and overall, really likable personalities. To top it off, most of them don’t follow generic character archetypes. As for sound, Hunter x Hunter has a line of great soundtracks that started off decent but got better as the series progressed. With the exception of a few minor characters, the voice acting in this series is excellent. 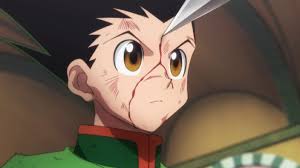 The series doesn’t have a strong start, it takes three episodes for show to get going. I’ve seen a lot of people drop Hunter x Hunter early and it sucks because the first two episodes don’t capture the series at all. Things start to get mildly interesting in the third episode, after that, the series just gets better and better. Hunter x Hunter has made a name for itself for holding a consistent high level of enjoyment during the course of its run, I think the series did a great job of doing that until the 90s. After episode 88, a bunch mediocre episodes come in. Hunter x Hunter also suffers from occasional BGM misuse. There are odd sound choices for some scenes. Sometimes they don’t really fit, other times they don’t fit it all.
PROS: