John awakens from a coma to discover his wife and daughter were slaughtered in a brutal home invasion. Haunted by images of the attack, he vows to kill the man responsible: Luc Deveraux. While John tries to piece his reality back together, things get more complicated when he is pursued by a relentless UniSol named Magnus. Meanwhile, Deveraux and surviving UniSol Andrew Scott are preparing to battle anarchy and build a new order ruled by Unisols without government oversight. They are weeding out the weak and constantly testing their strongest warriors in brutal, life-and-death combat. Luc has emerged operating the Unisol Church of Eventualism, taking in wayward Unisols whom the government has been secretly operating as remote-controlled sleeper agents. His mission is to liberate these Unisols from the implanted memories and the lies the government has inserted in them. As John gets closer to Deveraux and the rogue army of genetically enhanced warriors, he discovers more about himself. 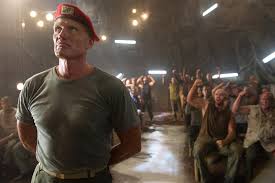 Its aesthetic influences, which range from David Lynch to Gaspar Noé, all but guaranteed the film’s elevation from the slums of B-movie obscurity to some kind of vulgar-auteurist master class, where a surrealist action niche nobody asked for could suddenly be filled. The idea of a Lost Highway for a post-UFC world is an appealing proposition, at least in cinephilic circles where high-art and exploitation flicks freely intermingle. And the cognitive dissonance generated by seeing Lynchian surrealism applied to what’s still essentially a Jean-Claude Van Damme action vehicle, replete with elaborate martial arts bouts and their attendant swaths of blood, makes for a pretty compelling viewing experience, particularly if the stylistic friction remains unexpected going in. There’s an element of “seeing it to believe it” built into the presentation: Expectations based on the history of a mostly direct-to-video franchise, an aging action-hero cast, and a patently absurd premise so conspicuously contradict the art-house sensibility of the film itself that you can hardly blame the first wave of audiences for feeling wowed by the shock.

On a purely technical level, Universal soldier: Day of reckoning is a masterpiece within the action genre, and a pretty good effort as a regular movie. Director John Hyams’ already impressive skills have significantly improved since the last installment, and in terms of framing, lightning, editing and all that crap this one unquestionably surpasses most of the higher budgeted products currently churned out by Hollywood. That’s before we factor in the really important stuff like choreographing bodies getting kicked around, furniture being smashed and blood packs being punctured.

It could be argued that this excellence is matched by the plot and acting, but even if that were completely true, it would not necessarily be a plus. For a very long stretch the film is a mood piece with a self-consciously somber tone, punctuated here and there with some vicious ass-kicking courtesy of Arlovski playing The Terminator, and a seemingly drunken Lundgren giving fiery speeches to his minions. It is all very well done, there is very little stupid crap, Scott Adkins makes for a believable lead, and Van Damme looks suitably tormented and wearied by age, but, really, can a serious science fiction plot coexist in a movie promising bone crunchings galore and Lundgrenades of ridiculousness? Is this what we were truly looking for?