Hello everybody! This week on anime club we have a dark take on the world of gods and goddesses in Noragami.

Hiyori Iki was a regular middle school student until she was hit by a bus while trying to save the life of a jersey-wearing person named Yato. This incident causes her to transform into a half-phantom. Soon after she learns that Yato is a god, her life is never going to be the same again.

Noragami is a modern Japanese fantasy with roots in the Shinto religion. There are two layers to the world of Noragami: the layer that we all live in, and the spirit layer that exists in the same place at the same time, invisible to normal humans. The spirit world is full of gods, ghosts, and monsters and has a society built mostly around gaining more followers in the human world. 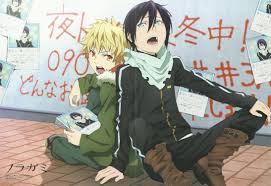 Yato, one of the protagonists, is one such god. So poor and long forgotten that he doesn’t have a single shrine, he advertises on bathroom walls and will do any “job” for humans for five yen (around five cents). However, alone, he can do very little and thus needs a weapon to channel his power.

The weapons of the spirit world are the actual spirits of deceased humans and thus Yato finds the wandering spirit of a young boy, Yukine, to be his sword. The final main lead of the story is our audience proxy, Hiryori, who, after an accident, finds her soul slipping out of her body when she least expects it and hires Yato to fix the problem.

Noragami is one of my favorite anime I have seen this year, and I’m not exactly sure why. The animation is smooth and crisp with a nice artistic style,but nothing groundbreaking.

Yukine is an interesting character. He is a boy stuck in eternal puberty, never able to grow up. He will never truly live a full life. It is unfair, but he has to come to terms with the fact that the universe doesn’t owe him anything—that his misfortune doesn’t make it alright for him to do illegal and/or destructive things. He has to accept the hard truths of the world and repent for his sins.

The first eight episodes of Noragami were a pendulum of love and hate for me. I loved the world, the conflict, and the characters. But Hiyori’s inconsistent character plagued me. Yet, once her character developed beyond this issue for the final four episodes and OVA, I enjoyed the series immensely and consistently. It you are looking for a fun adventure with a colorful and memorable cast of characters in an engrossing modern-day fantasy setting,Noragami is well worth a watch.

One thought on “Anime Club: Noragami”