Hello everybody! On this week’s anime club, we have the Miyazaki classic Ponyo.

The son of a sailor, 5-year old Sosuke lives a quiet life on an oceanside cliff with his mother Lisa. One fateful day, he finds a beautiful goldfish trapped in a bottle on the beach and upon rescuing her, names her Ponyo. But she is no ordinary goldfish. The daughter of a masterful wizard and a sea goddess, Ponyo uses her father’s magic to transform herself into a young girl and quickly falls in love with Sosuke, but the use of such powerful sorcery causes a dangerous imbalance in the world. As the moon steadily draws nearer to the earth and Ponyo’s father sends the ocean’s mighty waves to find his daughter, the two children embark on an adventure of a lifetime to save the world and fulfill Ponyo’s dreams of becoming human. 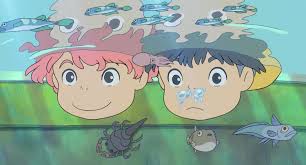 Unlike his two previous movies Howl’s Moving Castle and Spirited Away, Miyazaki takes a simpler approach to Ponyo in terms of two things. Firstly, he gives a lighter touch to the famous fairy tale The Little Mermaid by Hans Christian Andersen, which results in a simple story that still touches the hearts of viewers. Secondly, he works his magic yet again in creating those familiar wholesome characters with down-to-earth individualities and endearing relationships.

Speaking of characters, one character outshines the rest and that is the titular character Ponyo herself. She possesses an aura of innocence and adorability so irresistible that anyone would just want to see her triumph in the end, no matter the odds. The scenes which are particularly endearing to watch are the subtle moments she spends with Sousuke, in both times of relief and hardship. 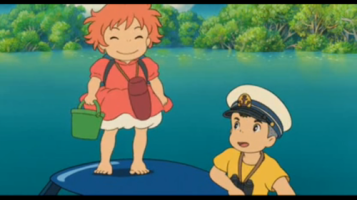 Another impressive feature of Ponyo is its different visual approach. Miyazaki takes a different approach towards the visuals by making it simpler than his previous movies, yet maintaining enough brilliance to leave the viewers in awe with its amazing animation. This is stunningly exemplified by the orchestra of vibrancy in the marine world, where Ponyo comes from; and the tranquility and simplicity of the human world, which is Sousuke’s fishing town. The contrast of the two worlds is visually achievable by Miyazaki’s mastery in blending simple artwork and fluid animation.

The voice casting for the dubbed Western version is a little hit and miss — Tina Fey is spot-on as the mum, but Neeson and Blanchett are a little first-base (is there anywhere Neeson hasn’t been king of?). Also, some parts may skew too young for some tastes, not least the icky Auto-Tuned anthem that plays over the end credits. That said, there is, as always with Ghibli, a sadness mingled with the sweetness, and there’s no arguing with the eye-boggling undersea visuals — this is the stuff James Cameron dreams about when he’s had too much Gruyère.