Hello everybody! Today we have the sequel to Uwe Boll’s actually decent movie, Rampage: Capital Punishment.

Bill Williamson is a warped, frustrated young man who hates his life and hates society which leads him to be driven over the edge of sanity while keeping his craftyness on. He is in his early twenties, lives with his parents and he works a low-paid job as a mechanic. Psychologically, he is continually bombarded with the problems of the world, by ubiquitous TV sets, radios, and the views of Evan Drince, a left-wing philosopher who seems to be his sole friend. One day, Bill, after being hurt after his parents tell him that it’s time he left home, and tired of being victimized by his nasty boss at work, Bill acts upon his plan to reduce the town’s population. He believes overcrowding causes the world’s problems. 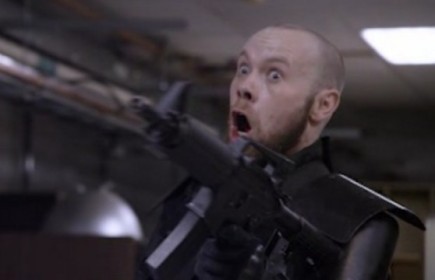 Violent anti-hero Bill Williamson has a plan to change the world by exacting vengeance on the rich, and ripping Washington apart. He holds a number of people hostage and uses his captives as his political platform to spread his message and awaken humanity. It’s time to destroy the system, and change won’t happen peacefully.

So, in contrary to my opening statement, I actually really enjoyed Rampage 2 (as I will call it). The main character, Billy Williamson, had even more of a political agenda than he had in the first film. It was actually quite inspiring, while I am not an anarchist by any means. The acting was surprising far better than what I expected, especially for a Uwe Boll film. I also did enjoy the two characters that return from the first film, they evolved and it worked.

While I definitely enjoyed Rampage 2, I definitely still had some qualms with it. My biggest pet peeve is that it is still is a Uwe Boll film and find his directorial style irritating and unnecessary. There I go again, going biased again in a short and honest interview. There are a few minutes that the story that seams to slip a bit and could have easily changed an essential moment in the film. Even though this occurs, your are still in for one hell of a ride filled with mass murder.

Just take a look at Bill Williamson’s way of thinking.