Hello everybody! For this weeks anime club we have the retelling of a classic anime, Ghost in the Shell: Arise.

GHOST IN THE SHELL: ARISE 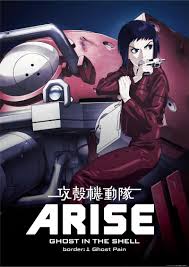 NO. OF EPISODES: 4 episodes

Set in the year 2027, a year following the end of the non-nuclear World War IV, a bomb has gone off in Newport City, killing a major arms dealer who may have ties with the mysterious 501 Organization. Public Security official Daisuke Aramaki hires full-body cyber prosthesis user and hacker extraordinaire Motoko Kusanagi to investigate, but on the case with her are “Sleepless Eye” Batou who believes Kusanagi is a criminal, Niihama Prefecture Detective Togusa who is investigating a series of prostitute murders he believes are related to the incident, and Lieutenant Colonel Kurtz of the 501 Organization who also wishes to keep an eye on Kusanagi. 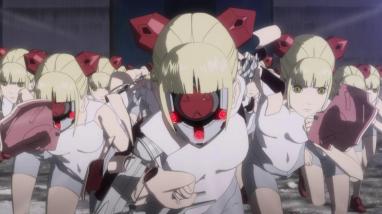 Ghost in the Shell: Arise is a retelling of the original show and the Stand Alone Complex series. The main major change, besides updating the animation style, is an entirely new voice cast. While I don’t think they do the greatest of performance, it is more than satisfactory for the start of a remake. I do want to point out that, despite its only four episode run time, Arise manages to tell many different and drawn out stories. The pacing is actually pretty decent too, as it flows evenly without breaking a sweat. 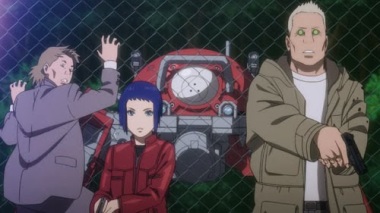 I want to jump back to this four episode run time. Now what the hell is that? A mere four episodes, what the hell are we supposed to do with that? We need more Ghost in the Shell. I am also disappointing in the majority of the fight scenes, as there seems no new ingenuity and originality to any of the battles. Also, why does Kusunagi get her arm torn off in each episode? Yes I get that she is a cyborg and can just repair herself, but do we need to make that clear each time we see her?!