Hello everybody, Today for our New Movie Show we have The Grand Budapest Hotel. 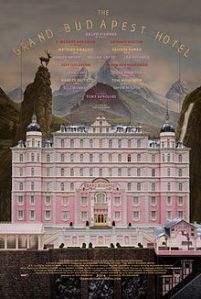 A teenage girl visits the monument of the writer who penned the book, “The Grand Budapest Hotel”. In 1968, that author was inspired to write the book when he visited that hotel, located in the European mountainous country formerly known as Zubrowka. Once a luxurious hotel, it, in 1968, has fallen on hard times. The author meets the then current owner, M. Zero Moustafa, who recounts the story of how he became the hotel’s owner and why he holds onto it and keeps it open despite it obviously making him no money. Zero’s story begins in 1932, when the hotel was in its golden era. Zero was the novice immigrant lobby boy, who, like all the other hotel staff, was under the guidance of M. Gustave H., the devoted concierge. Gustave aimed to please, he giving the guests whatever they wanted, especially the wealthy blonde women. The story largely revolves around one of those women, the wealthy Madame Céline Villeneuve Desgoffe-und-Taxis – better known as Mme. D. – her opportunistic son Dimitri, the bequeathing of a valuable painting called “Boy with Apple” to Gustave, the mysterious circumstances surrounding her death which is initially pinned on Gustave, and the attempts of Zero, his girlfriend – a baker’s assistant named Agatha – and others to clear Gustave’s name while Dimitri does whatever he needs to get what he believes is rightfully his, namely the painting. 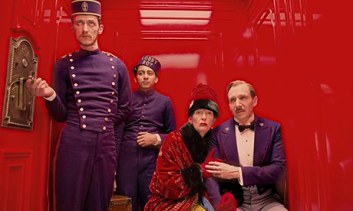 The Grand Budapest Hotel came to me well praised, even though I actually had no idea what it was about or even what kind of film it was. To my surprise it is a hilarious comedy film filled to the brim with cameos from hilariously great actors. I do have to give Adrien Brody a real shout out as I normally will not see any film that he is in. Although he actually makes quite an awesome villain. Add Willem Dafoe to the mix and they are an easily stoppable but a hilarious pair of antagonists.

I do have to point out that I did not find much wrong with The Grand Budapest Hotel. The film is a comedic masterpiece with an ensemble cast for the ages. If I had to gripe, which I guess I have to, it would have to be how little they touch on the The Author and Zero in later years. I know they used it as a framing tool but still.