Hello everybody! For this week’s movie club, we watch the voice acting documentary I Know That Voice!

I KNOW THAT VOICE! 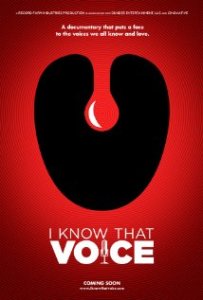 I Know That Voice is unquestionably by and for actors, filled with career advice and tips on technique that will appeal to people looking to break into the business. The good news is that bloviating is kept to a minimum. Even the driest shop talk segments don’t last very long and benefit from the interviewees’ laid-back, collegial nature, a quality that many actors credit to relatively low profile of voice work.

Animation enthusiasts will also appreciate the film’s many playful cul-de-sacs. Planted firmly at the heart of the film – though never hogging the spotlight – DiMaggio possesses an infectious enthusiasm. The best moments in I Know That Voice are ones that capture the joy of the profession, as when several actors relate how famous voices were born as failed impressions (Hank Azaria’s Simpsons bartender Moe is a bad Pacino, for example) or in a montage of actors reading a monologue from As You Like It as a succession of their most famous cartoon characters. 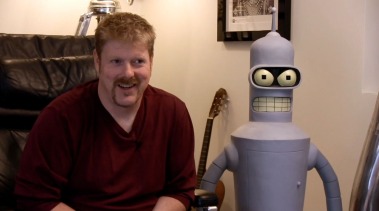 Dozens of television channels are hungry for new animation for all ages. Foreign animation, especially from Japan, needing English dubbing, has seen a huge surge in popularity. Advancements in computer animation means that every major studio is pumping out family friendly features as quickly as they can approve the scripts. Low cost CGI also brings us more animated characters in traditional film and television than ever before. Last, but certainly not least, the enormous video game industry has a voracious appetite for acting talent. There isn’t a single uninteresting moment. Fans of film or film making will appreciate the frank discussions of the process and methods. Fans of animation or video gaming will be overwhelmed by the sheer volume of hot, liquid awesome.