On this week’s anime club, we have the mecha extravaganza with Gurren Laggan. 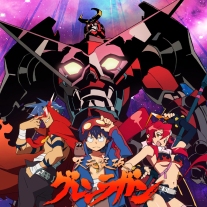 NO. OF EPISODES: 27 episodes

In a bleak future where humanity is oppressed by an army of mutants and forced to live underground, a young orphan unearths a powerful robot. Together with a boisterous man named Kamina, a beautiful sharpshooter named Yoko and many other friends, they use the robots power to fight against their oppressors and take back the surface.

In their closed-off underground village, Kamina and Simon chafe at the limits imposed by the village elder. Yet all this will change, when Simon stumbles across a fantastic device – just as the village’s peace is broken by a violent intrusion.

Many characters come in, and not one of them feel useless at all. The series is jam packed with lovable characters, both as inspiring heroes and as cool villains. It’s amazing how well all of these characters are maintained, keeping in mind how much they grow and change throughout the series. Even as they mature and change, however, they never stray a bit from their core personalities and that’s an amazing accomplishment in its own right. Some characters earn your respect even more as they perform their various role in the stories, while others become hated for their acts.

It’s to the credit of the creators of the characters and how deep and well made they’ve mad them, that they stir up a great deal of emotion in you. When a character dies, it feels like you’ve SEEN someone precious die. When the heroes of the story are in a tough position, you instinctively urge them on and hope they win. It’s the deep amount of emotional involvement that this anime brings out of you, that makes it so special. Also the fact that the story is focused on the characters not the mechas helps too.

TGL does, unfortunately, suffer from quality control issues. This is most painfully obvious in episode 9, where character designs lose their sharpness, Yoko becomes less busty, and in general everything takes on a rougher edge. (The degradation is, in fact, very similar to artistic breakdowns. Not to mention the fan service, way to much fan service.