We are back with another Hellsing review! This time we are going to be looking at the OVA series Hellsing Ultimate. 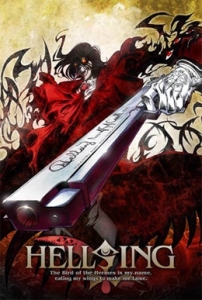 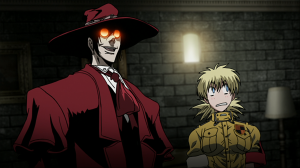 In flashback, Integra is seen assuming leadership of the Hellsing organization as she resolves a conflict with her uncle with the help of the vampire Alucard. In present day, Alucard goes on a mission to the town of Cheddar to silence a vampiric priest who has been killing townspeople, and in the process must also present the young police girl Seras Victoria with the choice to either die or become a vampire. Also, Alucard battles a Vatican priest named Alexander Anderson after they are both sent to kill the same vampire in Northern Ireland.

Hellsing Ultimate is everything that the original Hellsing series should have been. Our favorite police girl Seras Victoria is much more awesome than she was in the original series, as she was an incredible pussy the first time around. Alucard is much more menacing and even cooler in Ultimate, showing off even more of his endless vampiric powers. If you want a series that will follow as close to the manga as you can get, check Hellsing Ultimate out. 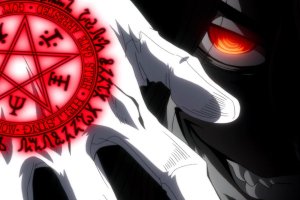 I honestly don’t have many gripes about Hellsing Ultimate this time. The English dub is far improved from its predecessor and it is a real thrill to watch. Be prepared to sit through an extra long session of Hellsing Ultimate. Fear Alucard! Nah, fear Seras Victoria and her dual-wielding cannons. Inhuman strength for the win.