Hello again everyone! As we continue with this month of haunts, we like to stay up to date with all of the trends. So, since we are on the verge of a clown invasion, we decided to watch Stephen King’s IT. 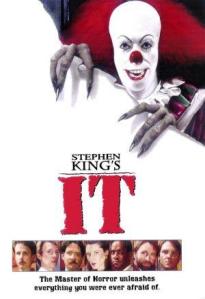 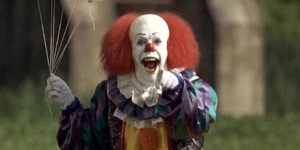 In the quiet town of Derry, Maine, Seven freinds, Bill, Eddie, Mike, Bev, Stan, Richie and Ben (the losers club) have all been seeing and hearing strange things. Most of which revolve around a Clown called pennywise in which they all admit being real, the kids eventually discover that the leader of the club, Bill’s little brother fell victim to this evil. The group sets out to stop the force and put it to rest once and for all. 30 years after defeating IT, Mike Hanlon, the only Member who remained in derry, is suspecting that IT has returned and is forced to call back all of the Losers club, due to a promise they all made to return if its evil shall ever resurface. Uncovering new powers, clues and evil the club reunites as adults and come face to face with the evil that has haunted and fed on dairy for the last centuries.

Now with all of the occurrences and appearances of menacing looking clowns, it’s only suitable that we watch the film that provided us with our own murderous clown throughout childhood (Note: Wow, never thought I would have to write that sentence). Anyway, can I just say how seriously awesome Tim Curry is as Pennywise? He definitely game me chills almost every minute he was on screen and I am not even afraid of clowns! Besides that, I have to 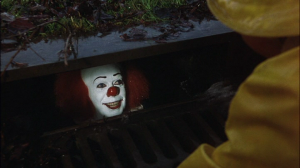 admit that the supporting cast isn’t actually that bad. While they don’t hold a candle to Tim Curry, it will have to do.

As far as the actual film IT is concerned, the film hasn’t exactly aged well…like at all.  While I can see its current resurgence due to the current homicidal clown epidemic, but many people this generation don’t have Pennywise in their lives to make them appreciate yet fear the existence of twisted clowns. Sorry, random rambling. As far as I am concerned, IT, looking past its faults, is one of the best Stephen King adaptations. Well..until The Dark Tower finally escapes out of production hell.