Back at it again y’all. The next on the list is a film about one of my favorite classic rock bands…The Doors. 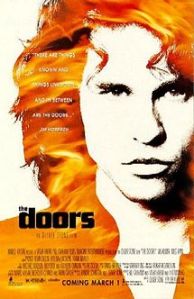 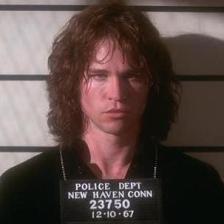 Oliver Stone’s homage to 1960s rock group The Doors also doubles as a biography of the group’s late singer, the “Electric Poet” Jim Morrison. The movie follows Morrison from his days as a film student in Los Angeles to his death in Paris, France at age 27 in 1971. The movie features a tour-de-force performance by Val Kilmer, who not only looks like Jim Morrison’s long-lost twin brother, but also sounds so much like him that he did much of his own singing. It has been written that even the surviving Doors had trouble distinguishing Kilmer’s vocals from Morrison’s originals.

Let me put it this way, The Doors is nothing like any of the other films we have, or will be, checking out over the course of this musical month. Even though I know this is due to my bias, The Doors has perhaps the best soundtrack in a musical film so far. While much of the soundtrack is sung and performed by Jim Morrison, there are a handful of

tracks that are actually sung by Val Kilmer. Kilmer’s performance is also by far the best feature of all of The Doors. Since most of The Doors actually focuses on Jim Morrison’s personal life, there needed to be someone to fill Morrison’s shoes.

Beyond the fantastic concert scenes though, The Doors leaves much to be desired. While Val Kilmer’s performance is off the charts fantastic, it creates an uneasy restlessness that makes many of Kilmer’s scenes uncomfortable to watch. The best analysis of these scenes that I found is attributed to the film review guru Roger Ebert: “The Doors is like sitting in a bar with Morrison, yet not being able to drink and watching him wither away.”