Hello everyone! See, I can change that greeting. Anyway, as our music month winds down to a close, I would like to end it with a more recent (ish) drama…The Runaways. 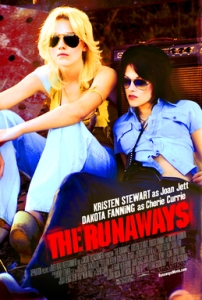 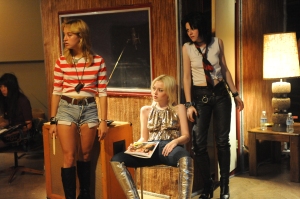 In 1975, San Fernando Valley teen Joan Larkin reinvents herself as Joan Jett, a guitarist who wants to form an all-girl punk band. She pitches the idea to a sleazy manager, Kim Fowley, who pairs her with a drummer and then searches for a face: he finds Cherie Currie, at age 15, the perfect jailbait image for his purpose; by luck, she can sing. Two others round out the band, The Runaways. Fowley books a tour, signs them to Mercury Records, and packs them off to crowds in Japan. Seeds of conflict sprout early: Fowley puts Cherie front and center in the publicity, she’s soon strung out on drugs and vodka, and jealousies arise. Without adult supervision, where can Joan and Cherie end up? 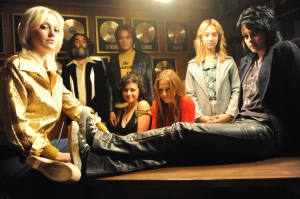 Oh The Runaways, while I have never been intrigued by your career, I agree that it could be a story worth telling…to the right audience that is. I just don’t happen to be that correct audience. Regardless, Michael Shannon and Dakota Fanning, both of who I had my doubts on, did a fantastic job portraying their characters with ease. Would I put them in another film similar to The Runaways? Definitely not.

“I’m your little runaway…”. Oh wait, that is the wrong song, sorry Bon Jovi. Anyway, as far as The Runaways are concerned, they have a solid drama documenting their rise to power. For the most part, at least. While the film could definitely add plenty of details in regards to their actual rise and actual fall, it wraps the career of The Runaways in a nice little bow for everyone to see. Oh, and why did they choose Kristen Stewart for her role? I mean she does an okay job, but why?