Hello everybody! House of Cards is back for a third season. If you want to check out my reviews of the previous seasons, check them out here Season 1 and Season 2. 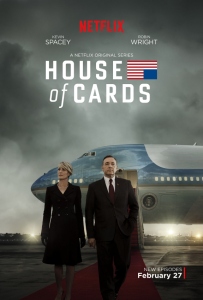 The season chronicles the first few months of Frank Underwood as President. The new President faces immense pressure from the start of his term, as betrayal and opposition grows inside his party. Determined to leave a legacy not be a “placeholder” president after assuming the office, Underwood makes ambitious moves to march towards election in the 2016 Presidential Elections.

Doug Stamper recovers from his injuries by Rachel Posner, although struggles with alcoholism. Gavin Orsay helps Doug to find Rachel in exchange for lifting the ban on his passport, however, the findings he delivers is of a body reported as a Jane Doe but with matching fingerprints to Rachel. Distraught, Doug entreats his brother, Gary Stamper, to stay with him for the following two months. After fleeing to Venezuela, Gavin reveals he gave Doug false information and that Rachel was alive, and said he would reveal her location if he helped a compeer get out of jail.

Doug tracks down Gavin and brutalizes him for the information, then sets out to find Rachel, who is working odd jobs to pay for a false identity. Doug captures Rachel and drives into the desert with the intent to kill her, but

reconsiders when she reveals she’s abandoned efforts to uncover Frank Underwood’s crimes and reveals her new identity to him. He releases her, but vacillates again and is last seen burying her body before returning to work for Frank Underwood as Chief of Staff after Remy Danton resigns, presumably jaded by the treatment Frank showed Jackie Sharp during the presidential debate.

Meanwhile, First Lady Claire Underwood is named the United States Ambassador to the United Nations and faces a crisis in the Jordan Valley, where Frank Underwood and the United States are pitted against the cunning President Petrov of Russia. Tensions rise between Frank and Claire, which culminates in Claire stating her intentions to leave Francis in the season finale.

The third season marks the possible end of the series, which it better not end on this note. This season was incredibly slow, while the series is not known for its fast pace it still could have picked it up just a bit. Story-wise, it was interesting enough to keep me binging five or six episodes a night. Towards the end of the season, it felt that it was trying to wrap up everything in a nice little bow. The main and supporting casts’ performances were phenomenal as usual, making the example the House of Cards is the cream of the crop. 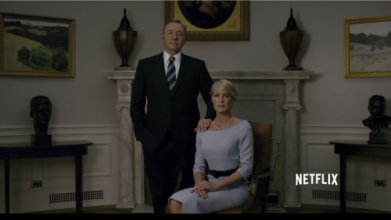 I was so excited for House of Cards to come back for its 3rd season. I do want to say that if what I heard is true (this is the last season for the series) then I will be severely pissed at the series creators.I wish that they incorporated Doug at least more of his character into the main story, and to forget about Rachel and Gavin. They should have either killed him off or given him a new story arc, we are tired of this cat and mouse game. While we did see Claire becoming more involved in the presidency, I wish she didn’t leave. She should have become to manipulative behind-the-scene first lady, suits Robin Wright’s character and style.

Hello everybody! For this week’s new movie thing show we have Paul Walker’s last film Hours. 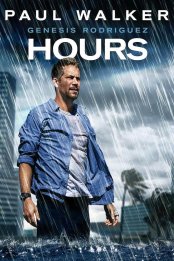 In New Orleans just before Hurricane Katrina hits, a pregnant woman gives birth prematurely. She dies and her baby is in critical condition. The baby has to be kept in a neonatal incubator. When the hurricane strikes, all the power goes out and everyone in the hospital leaves. But the baby’s father stays because the baby can’t be moved so he has to take care of his baby by making sure the ventilator stays on. And because there’s no power, the only power source is generator that he has to crank every few minutes. So he has to stay awake while waiting for someone to come for them.

The film gives Walker the chance for the kind of extended-scene emoting the Fast and Furious lugs don’t get when their women are killed off for plot reasons. Before the hurricane hits, a doctor breaks the news. Walker responds in one long, raw take: first confusion, then confused denial, than panicked bullying: “Don’t touch me, and tell me she’s fine!” It’s a sturdy performance undermined by the cheapness of the setup. We’ve seen deaths like this in a thousand movies, mostly written in to free up the hero for his adventures, and audiences have long ago accepted that such tragedies can be hustled through with a single screamed “No!” 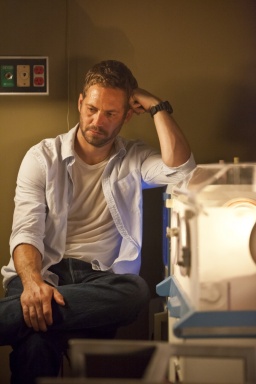 His reaction to the news that his wife has died seems painfully forced and his monologues to his daughter about her mother fall flat instead of drawing out emotion. He gets an ‘A for effort’ but it doesn’t make the movie any more enjoyable. Without the ‘based on a true story’ line the sequences of Walker running off to scavenge, find food, and try to get rescued seem like a pretty big stretch given that he’s got to be back in his daughter’s room to crank that generator every 2-3 minutes. And while they make a point of him setting an alarm on his watch and racing around the hospital when it beeps, it just seems awfully implausible.

Hello everybody! For today’s movie club we have the hilarious voice actor comedy, In A World…

Don LaFontaine “The Voice” of trailers dies age 68. In the voice over world 5 voices make all the money, recording 60 trailers a week, sometimes 35 a day. Don is labelled as the voice of God in archival interview footage. TV interviews with Sam Sotto (Fred Melamed) and Gustav Warren (Ken Marino) about their memories of the late Don reveal the enormous ego and self promotion of Sam Sotto who sees himself as equal to Don and mentor to new voice Gustav, young heir to a fortune. The late Don intoned “In a world . . .” the first iconic trailer. Film producer Katherine Huling (Geena Davis) is making a quadrilogy female mutant Amazons tween chick flick. Competition for the trailer voice over is fierce.

Better news still, Bell wrote and directed this gem. The actress proves to have a deeply funny, finely observed sense of subcultures. She’s admitted to being obsessed since she was a kid with the world of voice-over. She also displays a tartly compassionate feel for the human condition — be it achy or loopy, needy or arrogant.

Bell plays Carol Solomon, a vocal instructor and the younger daughter of Sam Sotto, one of Tinseltown’s legendary voice-over artists. Michaela Watkins is Carol’s older sis, Dani. She’s married to Moe (Rob Corddry) and works as a concierge at a lux L.A. hotel. A flirtation with a guest gives the comedy an affecting subplot.

Despite the preponderance of jokes and gags and shtick-dependent characters, In a World… never becomes cloying or too cute. Nearly all the actors pop with well-defined personalities. After a long career as a character actor (seven Woody Allen films), Melamed broke out as a quasi-lead in the Coen brothers’ A Serious Man four years ago and formidably dominates here. The fast-talking Martin and Marino nab their share of laughs, while stand-up stalwart Tig Notaro is hilarious as a butch staffer at the recording studio.