Heyo all of you Mirlanders! Now that the Limitless tv show has finally wrapped up, scroll down to check out the full review!

NO. OF EPISODES: 22 Episodes

Brian Finch (McDorman), a 28-year-old burnout and struggling musician, is introduced to NZT-48, a miracle drug that gives him access to every neuron in his brain. For twelve hours after taking the pill, he becomes the smartest person in the world, able to perfectly recall every detail of his life and capable of prodigious leaps of intuition and reasoning. With the mysterious U.S. Senator Eddie Morra (Cooper) providing him with an immunity shot to counteract NZT’s deadly side effects, Brian uses his enhanced abilities to help FBI agent Rebecca Harris (Carpenter). The problem is the FBI doesn’t know about the shot and Brian has to keep both worlds separate.

Heya NXT, we are back for another dose. The TV companion series to the cult hit Limitless, the series has had plenty of bumps during its first season run. However, what the series does right is have a fantastic and modern blend of comedy and drama that isn’t found in this era of TV too often anymore. A particular scene that stands out is when Brian is learning to hack, he doesn’t want the audience to know/see his antics so he has them watch cat vines while he narrates. Some may call it stupid, but for this kind of show it’s damn genius. Behind the mechanics of the show lies a strong core cast of characters that continuously give it their all. While some of the case of the week characters have been lacking, Brian and company sure as hell make up for it.

My biggest issue with this version of Limitless is their usage of Bradley Cooper’s character from the original film Edward Mora. While I know since he is a big star and all now and he doesn’t have time to appear on TV shows, I feel like he should have been more active of a character in the series. Don’t get me wrong, the fact they acknowledged him and me him the over-arching, behind-the- scenes antagonist of the season, they could have done so much more with him. The episodes in which he was featured were by far the standouts of the season, so why not use him more?

Hello everybody! For this week’s new movie show we have the Chris Kyle biopic American Sniper.

Chris Kyle was nothing more than a Texan man who wanted to become a cowboy, but in his thirties he found out that maybe his life needed something different, something where he could express his real talent, something that could help America in its fight against terrorism. So he joined the SEALs in order to become a sniper. After marrying, Kyle and the other members of the team are called for their first tour of Iraq. Kyle’s struggle isn’t with his missions, but about his relationship with the reality of the war and, once returned at home, how he manages to handle it with his urban life, his wife and kids.

American Sniper was definitely more interesting than I thought it was going to be. I have to applaud Clint Eastwood’s direction, as the film had a perfect balance between covering Kyle’s tours in Iraq and suffering from PTSD while trying to adjust back to life at home. The main cast performances were great, except Bradley Cooper sounded weird with a Texan accent. The role was so out of character for him but I believed he nailed it.

American Sniper has a lot going for it, but it does have some minor drawbacks. I understand that it is a biopic and is supposed to focus on Chris Kyle, but I would have liked to see his brother more than what was offered. He only appears twice in the film, before Kyle joins the Navy and leaving Iraq to return home. It does give us an alternate look at how war was affecting other characters, but there could have been so much more. Also, the film’s pacing is very slow. I was interested so I watched the film in its entirety but it felt like it dragged on for four hours when it is a little over two hours long.

Against medical advice and without the knowledge of her husband Pat Solatano Sr., caring Dolores Solatano discharges her adult son, Pat Solatano Jr., from a Maryland mental health institution after his minimum eight month court ordered stint. The condition of the release includes Pat Jr. moving back in with his parents in their Philadelphia home. Although Pat Jr.’s institutionalization was due to him beating up the lover of his wife Nikki, he was diagnosed with bipolar disorder. Nikki has since left him and has received a restraining order against him. Although he is on medication (which he doesn’t take because of the way it makes him feel) and has mandatory therapy sessions, Pat Jr. feels like he can manage on the outside solely by healthy living and looking for the “silver linings” in his life. His goals are to get his old job back as a substitute teacher, but more importantly reunite with Nikki. He finds there are certain instances where he doesn’t cope well, however no less so.

Every single one of us is at least a little fucked up mentally. Obviously some people have worse conditions than others, but deep down there’s something tweaked within all of us – it’s part of the human experience.  And that’s what makes Silver Linings Playbook, the new movie from writer-director David O. Russell based on the novel by Matthew Quick, such an impressive piece of filmmaking: the lead character is described is an undiagnosed bipolar locked up after a violent attack, but his recovery and the sometimes cockeyed support he gets from his loved ones only exposes the fact that none of us are anything close to what could be described as “normal.”

Following intensely serious roles in “Winter’s Bone” and “The Hunger Games,” it is such a joy to see yet another facet to Lawrence’s talent. She’s already demonstrated a maturity beyond her years, but “Silver Linings Playbook” allows her to let loose and have a little fun while still maintaining a dramatic integrity.

On the flip side, Cooper gets a rare chance to show his dramatic side. The early scenes in last year’s “Limitless” (in which De Niro also played a father figure to him) were always the most interesting – when he’s shaggy and paunchy and depressed, before he takes the pill that makes him Bradley Cooper. There’s a mania to his performance here as his character strives to convince himself of his capacity for happiness, but also a raw dark side. 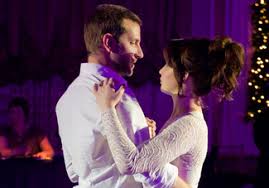 The romance is the point of the movie, but as this plays out, it lessens the comic potential that had been banked up so steeply at first: as so often in the past, it’s more rom and less com. We know Pat will transfer his affections – of course he will – and the first inklings of this strange possibility on Cooper’s damaged face are entertaining to behold. The actual shift itself, however, and the new emotional maturity in Pat it implies, are fudged. But Russell’s storytelling, pacing and audience reaction control are muscular and surefooted. This is a date movie that doesn’t offer the sophistication it thinks it does, but is as enjoyable and good-natured as the genre requires.