Hello everybody! For this week’s new movie show we watch Birdman.

Riggan Thomas, once known quite well to movie theater goers as an iconic super hero called “The Birdman” had recently turned down a fourth installment of the franchise. Now washed up, he attempts to reinvent himself as a director by staging a new adaptation of a Raymond Carver short story called “What We Talk About When We Talk About Love”. The events leading up to the Saturday night premiere prove to be one disaster after another as the original lead actor is injured while on set and Riggan scrambles to find a replacement, but the replacement proves to be exactly who he needs – a method actor who takes the job way too seriously. But Riggan has a hard time juggling between the set, his replacement actor, his equally washed up daughter, and a host of other disasters that prevent a proper staging of the play. Meanwhile, a New York Times critic who Riggan has to woo threatens to shut down production of the play before it even starts with a scathing review of the opening night performance. Does Riggan have a hit on his hands or will he even make it past opening night?

Birdman definitely wasn’t what I expected. Maybe that is because when  first saw the trailer/ heard about the film, I thought it was actually a documentary and not a comedy. The one thing that I absolutely loved about Birdman is the editing and camera work. It is done so well, edited so closely together that it makes the film look like it was shot in one continuous take. I can understand that this was to give the illusion that our main character was being followed by paparazzi. Lastly, I want to point out that Michael Keaton, Emma Stone, and Edward Norton are all great in their roles. Superb, ladies and gents.

There isn’t much I didn’t like about Birdman. The pacing was relatively slow, as at some points I wish it would stop dragging. That feeling quickly passed me by, as yet another episode with the Birdman was going to occur. I did not like Zach Galifinakis in his role as friend and producer. I do want to acknowledge that you performed decently, especially since it is such a far role change from his more drunken comedic roles. I just wouldn’t have cast him in this film. Not this time.

Hello everybody! Today’s review is a super fun one. Zombieland!

Zombieland is a hilarious satire comedy about the zombie apocalypse. The film stars Jesse Eisenberg, Woody Harrelson, Emma Stone and Abigal Breslin. Zombieland follows Columbus (Eisenberg), a college shut in, Tallahassee (Harrelson), a father who lost his baby and is looking for a Twinkie. They team up and eventually join forces with Wichita (Stone) and Little Rock (Breslin) We eventually follow all of these characters as they seek for a safe haven from the undead.

Zombieland is a very entertaining film to watch, as there is enough humor and drama to actually enjoy the characters. The chemistry between the main cast is amazing here and is a definite factor in this type of film. We actually have to believe that these characters have learned to adapt to each other and if there was no chemistry whatsoever that would make it horrible to watch. What I really enjoyed about Zombieland is that the film is entertaining as shit to watch. Woody Harrelson is perfect for gun toting Tallahassee and his quest for a Twinkie is the best character motivation I have seen in a while. 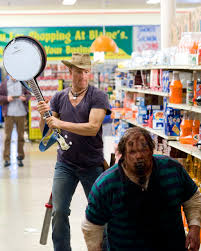 There really isn’t anything negative to say about Zombieland. Some of the shots are hard to see due to a shaky cam, but it is compensated because many of the shots look awesome. I don’t really like as Little Rock, but I guess she fills the role. I felt that Columbus’s “Rules to Live By” could easily be dropped from the film. I know it is apart of his character, but I felt it was unnecessary.

Alright, this is another one of those films that I was tricked into watching, just like White Chicks. At least this one was somewhat decent and actually had me laughing at some scenes.

Easy A follows Olive Penderghast, a straight A/model student, turn into the school whore. Easy A shows exactly how fast rumors spread and when someone tells only one little white lie it can expand into a whole web of lies. In this case though, it wasn’t exactly the smallest of lies. Olive lies to her best friend, stating that she slept with a college freshman named George. After that, Olive’s whole high school experience changes. Guys start to take notice of her, the popular girls get jealous of her, and she starts becoming more of “that girl” instead of the quiet and meek girl that nobody pays attention to. This whole thing came about as an excuse to not hang out with her best friend and nudist parents, but she then decided to adapt it while she reads The Scarlet Letter.

Easy A was actually quite a funny teen comedy (I’d never thought I would say that about a teen comedy). I would have to attribute most of the humor Emma Stone. She is one of the funniest actresses I have watched on screen in a while. I absolutely loved her in Zombieland. She has that certain skill to bring comedy to any situation. Easy A, the film as a whole, actually does quite a great job at displaying the transition of a shy girl to becoming a popular one.  It also shows how bad social groups and cliques are when it comes to the spread of information.

Despite Emma Stone’s performance, Easy A does have plenty of faults. First off, it is a teen comedy. There are very few teen comedy films that I think deserve any recognition, and the only one that comes to mind as I write this is Not Another Teen Movie. That film isn’t very good but I still like it.  My main issue with Easy A is the generic character casting. I know that it is supposed to be as close to a typical high school as possible, but it is just too typecast. All of the characters seem perfect for their roles, but none of the characters seem anything close to unique except Lisa Kudrow. Damn I love her.