Hello everybody! For this week’s anime club we have the straight to dvd anime Kite Liberator. A teenage assassin is cleaning up the streets of Tokyo. The police call her the Angel of Death, an unfeeling assassin who eliminates targets with grace and precision, leaving only a flurry of feathers across the bloody crime scene as a calling card. What the public is unaware of is that this notorious hitman is actually a polite young lady named Monaka. Could the placid face of an innocent high school girl really disguise such a ruthless killer? Monaka seems to be just an average high school girl. But she has a dark and terrible secret linking her past to a murderous police detective and her future to a fatal duel with the one person she loves most in the world. 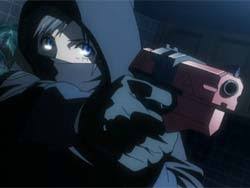 Kite Liberator has very few things going in its favor, even for a straight to dvd film. What really caught my eye was that there is a decent amount of gore when Monaka is murdering people. I didn’t expect it even after I read the description and especially after I started watching. I would like to point out that the writers to mix in an interesting space plot line with some semi-likable characters, which was a good choice to balance with their boring murder mix.

Kite Liberator is one of my least satisfying picks late night on Netflix. The film is the spiritual sequel to 1998’s Kite, and it doesn’t build on the original very much. The film is quite short, even by standards in 2007, with the film’s total run time of 58 mins. The film’s pacing is definitely off, as it switches from Monaka working at a cafe, murdering people, and a group of scientists on a space station. I found that the premise of “young high school student has powers of death” is incredibly overused and it doesn’t work for this film at all. Last thing to point out is that there is very little character development, leading to a very one-dimensional cast. Also, if you really want to watch Kite Liberator, you will have to watch it as English subbed.

One thought on “Kite Liberator: Angel of Death”